Let’s face it: everyone loves a good villain (even if we hate him/her too). I personally have always liked villains, both for their depth and simply their interesting characters. Since I was a small child, movie villains like Basil Rathbone’s Sir Guy of Gisborne in 1938’s “The Adventures of Robin Hood” and book villains like Grendel’s mother from Beowulf stood out to me. I loved to hate those whose dark presence permeated fiction.
So today I wanted to introduce you to the most memorable villains I have read in fiction. 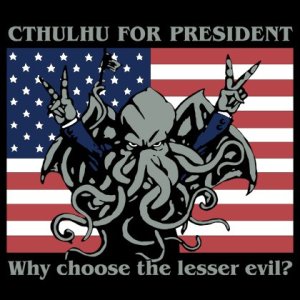 Featuring this one on my list is hilarious, considering Cthulhu only briefly makes an appearance in the short story “Call of Cthulhu.” And yet much of Lovecraft’s mythos surrounds this ancient god sleeping at the bottom of the ocean, who when awoken will consume the earth. I mean, yikes, that sounds terrifying! His presence permeates much of Lovecraft’s writing, even if he himself does not appear. So yes, he’s pretty memorable and very terrifying!

Most people have probably read the first book of this series, The Lion, The Witch, and the Wardrobe (Jadis herself being The Witch part). However, for me this character is so much more memorable from The Magician’s Nephew, where we learn about her origin story. Jadis is the Queen of the dying city of Charn (not in the same world as Narnia) who fought bloodily to keep her power, killing her own sisters. As a child, I remembering not thinking much of her in the first book, but in The Magician’s Nephew she is truly terrifying, surrounded by her apocalyptic city and hoping to escape into the new world Aslan (the lion) creates.

I am well aware that Voldemort is the main villain of this series, and yet he was never as memorable to me as Belletrix Lestrange. Introduced in book 4 (Harry Potter and the Goblet of Fire), she is a Death Eater who is Voldemort’s more loyal—and evil—supporter. But whereas Voldemort is calculating and reflective, Belletrix is aggressive and insane. She’s a highly creepy psychopath, and for some strange reason, I felt as if we lost a great character when she died.

The original vampire. I loved this book when I was growing up. Dracula is such a creepy, memorable character. He lives in Transylvania, only to come to London in search of more people to feed on. He is, in my opinion, the best villain in all of classic horror. It’s such a pity that in modern day vampires have been oversexualized and given the antihero treatment (they’re not bad, they’re just misunderstood…right). But Dracula, he is a truly great, terrifying villain, and no sparkling vampire can replace his memorability.

If you don’t know the plot of this one, it follows the letters of Screwtape (a devil living in Hell) writing to his nephew Wormwood (a devil living on earth) on how to seduce his human into sin. It plays on the whole idea that each of us has an angel on one shoulder and a devil on the other. Even if you aren’t religious, I will bet that you will be creeped out by Screwtape’s character. He is so calculating; there is no goodness in him. He is truly terrifying, and memorable.

Shylock (from William Shakespeare’s The Merchant of Venice)

Out of all of Shakespeare’s villains, this one is probably my favorite. He is a Jewish moneylender who lends Antonio—his competitor—some money on the supposition that, if he cannot pay it back on a certain date, Antonio must relinquish a pound of his fresh to Shylock. The whole point is that he wants Antonio dead. Shylock is such an interesting character. On one hand, you feel bad for him for being abused due to his Jewish faith. On the other hand, he is a pretty horrible human being who will do everything to seek revenge. He’s my personal favorite Shakespeare villain!

Count Olaf (from Lemony Snicket’s A Series of Unfortunate Events)

I’m talking about the book villain, not the movie or TV series villains (who play the character very differently). I remember reading the first book back when I was young and I loved him. I didn’t have the reaction that he was creepy. Instead, I found him amusing. He’s so evil, and such a great actor that he can disguise himself as all these different people, just in hopes of getting the orphans’ money. I just loved him so much, and I personally think he makes the series. 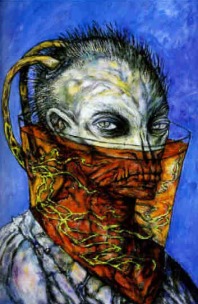 Christopher Carrion (from Clive Barker’s The Books of Abarat)

Now, this series has a lot of issues and though I love the idea, the books do fall short of what they could be, if Barker had given all the characters the depth he gave Carrion. Christopher Carrion is the Lord of Midnight, and the cruel ruler of the twenty-five islands of the fantasy world of Abarat. I will say, he becomes less of a villain in the third book, but even so he’s such a memorable villain. Even though I’m not a huge fan of the series, his character still stuck with me. He is like a Darth Vader character; a story of someone who, quite literally, went to the dark side and eventually seeks redemption. He is such a fascinating character and, if Barker does end up publishing the last two books of his series, I will be reading them purely for Carrion’s character.

What are your most memorable villains in literature? Let me know down in the comments, follow my blog for more madness, and, as always,

Best wishes in your life full of adventure,

*All images courtesy of Bing Images

7 thoughts on “Most Memorable Book Villains”

A visit to an orchard and dairy farm. Fall vibes in the air.
Happy Birthday to the queen of Crime, Agatha Christie! These are just a few of her greatest books!
The Unpleasantness at the Bellona Club by Dorothy L. Sayers, originally published in 1928.
Fall moods and reading. I just started David Copperfield by Charles Dickens. His books have such a cozy feel to them!
Classic books which give me massive fall vibes and I'm so ready for fall!
Mini Review: ⭐⭐⭐⭐⭐/5 Stars.